Mariners are advised that all auxiliary vessels (tenders, dinghies, kayaks, jetskis, etc.) on board or being towed behind yachts are to have the cell phone number associated with the yacht attached and in an obvious location on the auxiliary vessel so that in the rare instance that an auxiliary vessel becomes inadvertently and unknowingly separated from the yacht, that first responders are not diverted from other duties for an unnecessary rescue search for the non-existent crew of a seemingly abandoned vessel.

Furthermore, it is always recommended that all vessels at lock, lift bridge, and terminal walls along the canal system have a cell phone number associated with the vessel posted in a window or windshield near the helm when there is no one on board.

Mariners are advised that the Green Island Lift Bridge over the Hudson River in Troy is inoperable through July 13th due to construction activities.

The overhead clearance of the Green Island Lift bridge in its closed position is 29 feet at Mean High Water. Tidal information for Troy, NY can be found at https:​//tidesandcurrents.​noaa.​gov/noaatidepredictions.​html?id=​TEC1603&legacy=​1​

Features along the Albany to Waterford portion of the Hudson River are listed by mileage at http:​//www.​canals.​ny.​gov/wwwapps/navinfo/navinfo.​aspx?waterway=​hudsonriver​ 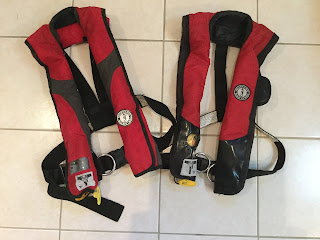 
Over 100 people have already purchased their tickets for the Assoiffés event. Depending on how many people wish to join us, we will order the correct sized bus for the event and dinner at Soif afterwards. Please confirm if you will be joining us for a fun wine date.

We have decreased our forecast and now believe that 2018 will have approximately average activity. While we still do not anticipate a significant El Niño during the 2018 Atlantic hurricane season, most of the North Atlantic has continued to anomalously cool over the past two months. The eastern and central tropical Atlantic is cooler than normal at present. We anticipate a near-average probability for major hurricanes making landfall along the United States coastline and in the Caribbean. As is the case with all hurricane seasons, coastal residents are reminded that it only takes one hurricane making landfall to make it an active season for them. They should prepare the same for every season, regardless of how much activity is predicted.

In Memory of William M. Gray3

This discussion as well as past forecasts and verifications are available online at http://tropical.colostate.edu

Anne Manning, Colorado State University media representative, is coordinating media inquiries into this forecast. She can be reached at 970-491-7099 or anne.manning@colostate.edu.