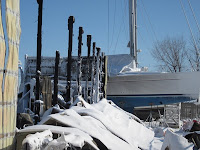 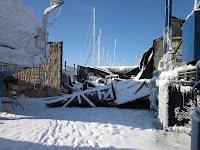 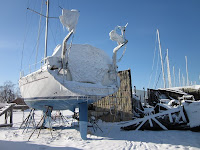 Firefighters from six volunteer departments worked for hours in below-zero temperatures to try to douse the roaring blaze.

State fire investigators, including a K-9 unit, scoured the site early Monday after fire consumed the two-story, tin-sided building, causing it to partially collapse. Two walls were all that was left standing, with large sections of the tin siding on the ground.

The cause was still under investigation Monday.

The building, located across the road from San Marino restaurant, is a total loss, according to Rouses Point Fire Chief Mike LeBlanc.

A neighbor called in the fire about 11 p.m. Sunday. It was already well under way when LeBlanc and his crews arrived soon after.

"I could see the fire burning under the tin and heavy smoke blowing across the road," he said Monday. "There was a light west wind blowing."

Fortunately, no boats were inside the structure, but equipment used in boat repair and maintenance was destroyed. That included some charred and ice-covered forklifts visible in the center of the structure.

Firefighters were able to save some boats located just 5 to 10 feet from the building. The sailboat Bon-Ange, from Montreal, was coated in ice and frozen foam yet otherwise undamaged despite sitting about 5 feet from the rear of the building.

LeBlanc said another sailboat out front was actually in more danger, as the west wind pushed the flames toward it. It also sat intact but covered in ice Monday morning, as was a mobile boat lift.

Beka Church lives about three blocks away and heard the fire engines as they responded to the call.

"I looked out the window with my sister. I saw this big column of smoke," Church said Monday.

She thought it might be the large warehouse just south of the marina, so she grabbed a camera to get some pictures.

"The fire was huge. The smoke was blowing across the (Montgomery) street," Church said.

She was glad to hear no one was injured and no boats were destroyed.

"I have to give kudos to all the firefighters who were out there. It was freezing.

LeBlanc said the fire crews worked in frigid and slippery conditions, with the temperatures about 6 degrees when they were called in and falling to below zero through the night. He said there were no injuries.

The repair shop contained paint, gas tanks and fiberglass supplies, but LeBlanc said those didn't cause any additional difficulties.

There was no problem with the water supply, despite a water-line break in the north end Friday that led to a boil-water order Sunday for part of the village.

Montgomery Street was closed from Rose Avenue to Lake Street until about the time Rouses Point was initially back in service.

LeBlanc did not know the owner's name because the building was either in the process of being sold or had just sold.

The fire departments at the blaze were Rouses Point, Champlain, Mooers, Chazy; Lacolle and St. Paul from Quebec.